Having a very hard times with this meeting.

The past two years we have had our share of hard moments to swallow.  In January 2019, after 18 years of devoted service, my beloved scientist husband was told by a newly commissioned department chair that his faculty position as the director of their flow lab will come to an end in six months.  Money, funding the lab was the issue and that they wanted a more aggressive approach to the running of the lab.  They downgraded the position to masters/non-faculty and hired a guy from the Netherlands!

My husband has been very loyal to the needs of the researchers that used his faculty.  Many times on the weekends, he would answer calls, go and help a grad students on the weekends, talked one through an issue using the machines.  He created a flow microscopy graduate course and taught it for 10 years, held open houses, seminars, and wrote a grant and was awarded a $300,000 grant for a new sorter machine.  He worked in collaboration for other grants, other research projects, and happily learned new research.  He even was invited and accepted the opportunity to be an NIH grant reviewer for a few years.

Well, now here we are 4 months our from his retirement and he has been looking for a new science position with no avail.  Over the last 2 years he has applied, been screened, called for an interview, prepared for the interview, interviewed, and then rejected.  Time after time, month after month and now year after year.  He's 64 and still wanting to work in science.  He told me one day last year, "I'm not done with science yet."  I know he isn't and my heart just breaks for him.

All this time, I have had no ability to help him, except to pray.  I have prayed novenas, 2 54-day rosaries (which actually extended his position each time, since they couldn't find someone who did what he did for 18 years).  I have offered up Mass, and fasted, but still no new position comes.  He has a good attitude, better than me.

Anyway, just wanted to put it out there.  If anyone wants to add my husband to their prayer list for a new position which would allow him to finish up his research career the right way,  I thank you. 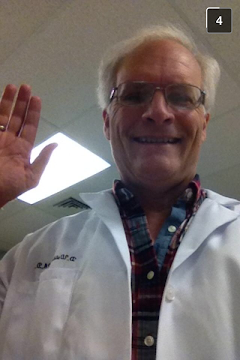 Oh, what a father we have in St. Joseph!

Oh what a father we have in St Joseph. He has no speaking role in the Bible, but his message is loud and clear.  A strong faith in God and humble obedience spoke loudly from this mild ancient carpenter.  Throughout Jesus' short life, Joseph was in the background keeping his little family fed working in his workshop.  As the years went on, he taught his carpentry skills to his young foster. Ever wonder what the conversations were like that he and Jesus had while they worked together?

As Jesus and Mary were, I don't think Joseph was without sin, however, he was probably a naturally good and honest man. Considering he, unlike his peers, didn't want Mary put to shame or worse when she was found pregnant.  He listened to the dreams, he obeyed the angel, his humble ways were clearly how he was able to believe what he saw and heard.  Many times, it is the stubbornness that gets in the way of our obedience to what we may not see, or hear, but know.  Many times our humanness gets in the way of the sacred.

In St. Joseph's simple world, it was the sacred that dominated their existence.  God was among their every day lives covered in flesh.  I'm sure there were moments that seemed more human and mundane, but then there were the moments that brought them back to their reality of the God-child in their midst. Oh what a gift God gave them!

St. Joseph is a role model for all, not just fathers, or workers, but all of us.  We could all use to ponder his humble obedience in the bleakest of nights.  He experienced nights when his whole world was on his shoulders, leading a donkey with a very pregnant wife on it, packing up his family quickly in the dead of night to a destination unknown for a time unknown.  He did it, and they survived and were comforted by his leadership.

Oh what a father we  have in St. Joseph.  Strength, leadership, comfort, trust, obedience, truly traits to ponder for the year.

It's 6:30 am and the baby is already waking up.  Luckily I am married to a morning person who loves his morning time with his coffee.  He happily gets up and retrieves the little one and goes downstairs, leaving me peacefully in bed.  My turn will come later in the day when he runs errands or just chills for awhile and pursues his interests.
Such is a day in the life of grandparents caring for a  young grandchild.  We don't personally know any other friends in this situation, which makes it awkward to try to get together.  Our daughter works a fulltime job, so we have her little guy when she works and sometimes at night when she works late.  He's a sweet little boy, little blue baby eyes and a smile that lights up the room.
In these days when life issues are at the forefront of the news and political agendas, we are fully aware of how things could have turned out if his mother had decided to terminate her pregnancy.   Her life would be less complicated then, for sure.  Oh and to think of what my husband and I could be doing right now!  We have a brand new camper out back only used 2 times since last summer since we purchased it.  But wait, that is total nonsense, camping can wait until he is older and can happily go with us and enjoy the outdoors.  That is really the way we are thinking.  Yes, yes, it's hard when he cries for everything at this point in his little 9-month old life.  But, when he laughs at something my husband does or at a cat walking by him, they are the golden moments.
We both are exhausted at the end of the day, but we sleep well knowing that the day was spent loving a little boy that came into our lives unplanned, but loved and accepted. 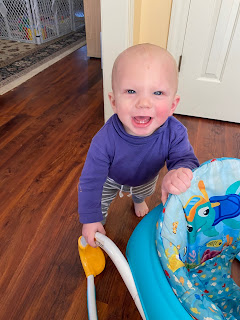 Once, several years ago, our parish priest, during one of his homilies told us that we cannot pick and choose the teachings of Jesus.  If you are going to profess that you are a Christian, then you have to take all of Jesus, not just part of Him.

This stayed with me, as you can  see.   As a professed Christian, actually a Roman Catholic Christian, I have made it my priority to read the bible daily, read the readings of the liturgical year and know the teachings of our Lord. Do I  adhere to all His teachings?  Yes, as humanly possible.

The Ten Commandments is the place to start:

8.    You shall not bear false witness against your neighbor.

9.    You shall not covet your neighbor's wife.

10.   You shall not covet your neighbor's goods.

After looking over these commandments and seeing where you are good with these, next,

the Beatitudes are the next good place to study.

The text of St. Matthew runs as follows:

Being a Christian is NOT an easy life.  The above guidelines are plain and simple in reading, however following them is not.
Posted by Ebeth No comments:

This blog used to be so much busier than these past years...I had so much to say.

It's been hard and then 2020 hit and it got just a little bit harder.

Prayers would be appreciated.

Jon Voight’s Impassioned Plea For America To Come Together