The Mass: The Holy Food

This is the hard one.  This is the one teaching that Christians have the most trouble with.  However, I am here to, at least explain how I came to believe. 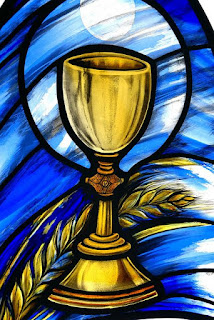 As a cradle Catholic, one would think that my faith was simply drummed into my head and that today I robotically attend, pray, and receive this bread offered in the Mass as I should.  One would understandably think this.  Well, that's not the case any more.  As a young Catholic, I never thought anything about it, it was the thing we did and I didn't question it.  As a young Catholic mother, it was important to me to make sure my children received their sacraments, including First Communion, so that they could be part of our thing we did together.  Well, not really, I made sure they made their sacraments because that was what was expected of us....and that was the thing we did together.  Well, no, it was because I believed in the Holy Roman Catholic Church, her teachings, and that Jesus Christ was our redeemer who came down and humbled himself and took the role of a human to teach us about love and forgiveness and bring us to our eternal reward undeservedly.    Yes, all three reasons!  That's why, and seriously speaking, after marrying my husband, who is not Catholic, I realized that if I don't know my faith well enough to answer his questions, I won't be doing my best to lead my family to God.  After a few years of taking local and online courses, I became a master catechist.  So, yes, I do believe in the real presence in the Eucharist not because I am supposed to, or that it was drummed into my head, but because I took the time to do my own research and learning.
But here's another take, from a master mind who never became a Catholic, but respected it and probably believed in her.

"And let me make it quite clear that when Christians say the Christ-life is in them, they do not mean simply something mental or moral.  When they speak of being "in Christ" or of Christ being "in them," this is not simply a way of saying that they are thinking about Christ or copying Him.  They mean that Christ is actually operating through them; that the whole mass of Christians are the physical organism through which Christ acts--that we are His fingers and muscles, the cells of His body.  And perhaps that explains one or two things.  It explains why this new life is spread not only by purely mental acts like belief, but by bodily acts like baptism and Holy Communion.  It is not merely the spreading of an idea; it is more like evolution--a biological or superbiological fact,  There is no good trying to be more spiritual than God.  God never meant man to be a purely spiritual creature.  That is why He uses material things like bread and wine to put the new life into us.  We may think this rather crude and unspiritual.  God does not:  He invented eating.  He likes matter.  He invented it."

CS Lewis, Mere Christianity
Wow, talk about putting it down!  Our humanness cannot explain our Creator and Heavenly Father.  We cannot and were not consulted in how he was to come down to meet us where we are and bring us up to where he is.  BUT, he gives us a way to be changed, forgiven, and loved.   Loved enough to then, in turn, desire to be wanted.  The desire to be wanted by Christ, to have him "in us" and dwell in our hearts as we live our lives here as militant people fighting against the dark one.  Through this  holy food that God has given us to nourish our souls and empower our hearts we can be Christ in this world around us.
This is what Holy Communion is, this is what saves humanity.  By realizing that God designed the Eucharist to be physical food that we receive in our mouths and are nourished within our mortal bodies, God gets in close and is able to inspire us.  Only if we accept this sacrificial grace in the Eucharist can we take it to the streets, only if we realize that not only is it what we do as the body of Christ, but what we do for Christ, enabling to be his fingers and muscles, the cells of his body in the world.  No change is ever easy to be sure, perhaps if we took a second look at what we do during Mass and listened carefully to the prayers can we then appreciate this sacrament of communion so much more for what it truly is:      The Holy Food.
Posted by Ebeth

Email ThisBlogThis!Share to TwitterShare to FacebookShare to Pinterest
Labels: Catechesis, Prayer, The Liturgy