How have I stayed Catholic?

Why am I Catholic?

How have I survived, literally survived being Catholic all these years?  At my age, I have seen quite a few changes in our Churches, from Latin and veiling to the return of the original wording a few years ago.  Second Vatican, the deaths of popes and the rise of sexual abuse among the clergy and believers.

My upbringing was in a Catholic home, I attended Catholic schools off and on, and received my sacraments.  As I got older and began my own family, my faith waned a bit, but never went away.  As my husband and children grew in curiosity about the Catholic faith, I found myself seeking more about my faith.  I began taking courses through my parish in Texas.  When we moved to NC, I continued taking courses, this time through the diocese and at Notre Dame STEP program and University of Dayton VLCFF program.  I took courses like, Bible History, Jesus, Old Testament, New Testament, Sacraments, Catholic Social Teaching, World Religions, etc.  I found out that I had taken enough classes and was able to be certified as a Catechist!  I learned a great deal during that time. I learned a great deal about other religions and then looked further into some I questioned.  I know why the Catholic Church is the Church of Christ and that within her, she gives us all that we need to get through out daily lives here on earth.  This is the fullness of truth.

Also during that time I spoke to a priest at the parish I was attending with our children, my husband was not Catholic and was attending the church of his childhood with his parents.  It was difficult to part ways to worship the same God.  He basically advised me to stay Catholic as long as I can......what??  Perhaps he was right, nowadays, its hard to be anything religious or spiritually.

Not backing down, I like being a Catholic.  Yes, I have been a Catholic all my life, but in my early 30's, I began to look at my faith and the Church differently....more like, "are you mine?"  Am I here because of me or my parents?"  When I began to think like this, I realized that I needed to own my faith and know why I believe what I believe and how do I pass it to my children?

Over the course of a few years, I read a lot and learned a lot and met a few pivotal people that helped my journey.  One friend introduced me to Dr. Scott Hahn...I watch a few of his tapes and was hooked, bought his "Rome Sweet Home" book of conversion and was committed to my faith.  I guess you could say, I became a revert even though I never left.

Anyway, I am here as a Catholic despite the corruption, I'm not here because of the priests, deacons, cardinals, or the POPE!!   I am here because of Jesus!!  WE are all fallen, sinners, stupid and idiotic, we all have our faults and failures, even the top people of the world put their underwear on the same way, so I am NOT here because of any of them.  I am here standing tall and committed as a Roman Catholic because I believe in Jesus Christ and the Triune God that loves me and offered himself up as the sacrificial lamb for me and you, and the people of the world. 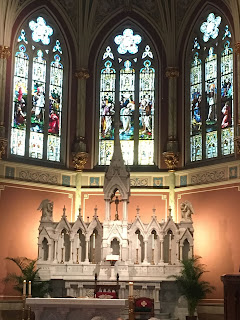 I wish I could find courses to take over here by me (N.Tx) about an hour from Ft Worth.

Thank you for sharing..
I veil, I actually veiled even before I converted to catholic. I veiled as a Baptist, I veiled all the time except when I was asleep.
I am the only one in our big Perish to..

Oh okay you have to approve before it appears.
I am over in Alvord, so closest college is the one between Decatur, and B.Port.. I checked the college there and nothing. not even latin classes :(
Here is my email