May is the month of Mary and I desire to continue to consecrate myself to our Holy Mother. This year I will be reading Fr. Michael Gaitley's book, "33 Days to Morning Glory" for the second time. Here in his book, Fr. Gaitley discusses Marian devotion through, as he describes them as the Marian giants, St. Louis de Montfort, St. Maximilian Kolbe, St. Theresa of Calcutta, and St. John Paul II.

St. Kolbe dedicated his life to Marian devotion and worked hard to bring this devotion to the world through his organization called, the "Militia Immaculata." Before he was arrested and taken to the Auschwitz concentration camp, he wrote his teaching on Mary's words to St. Bernadette in Lourdes, "I am the Immaculate Conception."  Let me explain my understanding of St. Kolbe's teaching.

Mary was born without original sin for a purpose like none other. Her conception in her mother, St Ann, is the Immaculate Conception we speak of.  She was the pure vessel set apart from all others in preparation for becoming the Theotokos (Mother of God).  She found favor from God in the very beginning and Mary's Yes is important as witness to her sinless soul. I've wondered what a person would be like who sin never touched their being. Certainly without evil within their souls, they would be a holy person, no doubt. Mary was this and more. When the time was fulfilled for her, as is described in the first chapter of Luke, the Angel Gabriel greeted Mary with these words, "Hail full of grace, the Lord is with you." and "Do not be afraid, Mary, for you have found favor with God." Grace perfects and Mary was full, totally full of grace; so Mary was perfect. There have only been two people without sin whose feet touched the earth: Mary, a simple young girl, and Jesus, the God Man. She would carry in her very womb the son of God in Jesus Christ, and He would humble himself in human form and die a horrific death in atonement of our sins. Big, big undertakings! 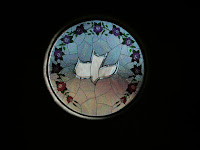 Her unflinching acceptance to conceive through the Holy Spirit was beyond brave.  Her cousin, Elizabeth, who bore John the Baptist, was a married woman. No divine intervention needed to take place for her to conceive in her late years other than the fertilization of her union with Zechariah.  In the words of the angel, Gabriel, "Do not be afraid, Zechariah, for your prayer is heard, and your wife, Elizabeth will bear you a son, and you shall call his name John." There was no mystery AND no need for an answer from either Zechariah or Elizabeth since they prayed for this; also there was no eminent danger or extraordinary risk in their new situation. Mary, on the other hand,  single, but betrothed, stood to lose everything, including her life with this pregnancy.  Thus, God took care of her with Joseph.

In answering Mary's question in how this will be done, Gabriel said, "The Holy Spirit will come upon you, and the power of the Most High will overshadow you; therefore the child to be born will be called holy, the son of God." The Holy Spirit, with the power of the Most High caused the conception of Jesus in Mary. St. Maximilian Kolbe sumed up this with the Holy Spirit being the eternal or "uncreated" Immaculate Conception and Mary as the human, or the "created," Immaculate Conception.  "For with God," said Gabriel, "nothing is impossible"

Without the Holy Spirit's intervention, conception would never have happened and St. Joseph could not fulfill this role.  The Holy Spirit and Mary created Jesus in fulfillment of God's plan.  When Mary calls herself the Immaculate Conception, she is saying that she is the human part of the Immaculate Conception of whom we can relate.  That she is perfect, but that she is NOT God; that is the Holy Spirit.  She is the vessel in which salvation was born.  Her will agreed with and met God's Will and the two became one in Jesus Christ.  This is what St. Kolbe describes as the quickest and easiest way to sainthood, W + w = S.  God's Will plus our will equals sainthood.

Finally, at the foot of the cross, Jesus gave his mother to us.  Mary had served him well and now we needed her special graces to fight sin, pick up our crosses, and together with her, fight the great fight that is evil.  She is the Immaculate Conception, she is our Holy Mother, and she is waiting for us to call on her.