A Homily mixed with catechesis today...WOW!

Sad to say that there are Catholics that don't believe in the real presence, but they attend Mass every week.  They receive the Eucharist and say all the prayers, but still don't believe that what they are receiving, praying, and saying "Amen" to is the actual body and blood of Christ Jesus! 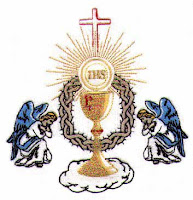 As a "cradle Catholic" I know that it is voluntary to further my faith education and before I decided to study for my Master Catechist certification I did very little religion-based reading.  Life is as it is and along the way attending Mass each week just got to a point where it was a robotic activity that I did because I was expected to be at Mass each week because I am a Catholic. Lucky me, I never lost touch with the Eucharist, though and felt it was something that I needed to get me through my life.  But this is not so perhaps for some who have lost touch with their faith and the reason for attending Mass.
The homily today was superb.  Fr. taught us about the Eucharist, the real presence, the sacrifice of Jesus Christ.  God's love for us enough to be incarnate and die for us in order for us to get to Heaven.  That others outside the Church should think we are crazy, but we aren't.  He explained the Eucharistic prayers, the out-stretched hands and the power transferred from God through the priest to the gifts of bread and wine.
He said he could go on for hours, but he didn't.  It was just enough to hopefully catch the attention of some that needed to hear his message.  It is the real thing, Christ's flesh and blood that we partake each time we attend Mass and receive communion.
A gift like no other and frankly, those who do not accept this truth well, they are the crazy ones.
Posted by Ebeth

Maddy (my 7 year old) really enjoyed his homily today! I love when that happens!

Hey Adrienne! How are you?? Glad you liked the hook! Continuing education is a diamond in the rough!!

Hi Becky! Do you have a blog??